We are shipping all orders same day world-wide from our Sterling, VA HQ. Click here for International Shipping details. IcePlate Sleeve advances our vision for modular thermoregulation and hydration. By harnessing the full power of the water we already carry on duty, IcePlate Curve is now more convenient than ever with IcePlate Sleeve. IcePlate Sleeve only needs to be mounted to your kit once to make exchanging empty IcePlate Curves as easy as changing an empty magazine.

Pairing IcePlate Curve with IcePlate Sleeve is a plate carrier cooling/heating/hydration game changer. We have packaged them together to give you the best value package we have ever offered. The IcePlate Sleeve Combo is the external plate carrier hydration solution for tactical professionals in austere, no-fail environments.

Wearing IcePlate Curve in the IcePlate Sleeve means the elimination of ruptured bladders, no wasted MOLLE fields, and finally sitting up flat and comfortable while securely wearing hydration and your plate carrier in a vehicle. It’s the lightest, toughest, flattest solution plate carrier hydration solution available. We call it Hard Cell Hydration - you’ll call it a Godsend.

If you already own an IcePlate Curve and are looking for the IcePlate Sleeve Standalone, click here.

Each IcePlate Sleeve Combo comes in a set color pairing. To add an additional IcePlate Curve Stand-alone in a different color, click here.

Designed and manufactured in the USA from US materials.

Fulfilled from our Sterling, VA HQ. Not subject to ITAR.

US and International Patents Pending

This just makes sense. It is a perfect universal solution. So, you can throw on your main pack, and not pop your bladder & get a wet butt. a counter point though, the marketing shows that the hose can fit through the sleeve, but it can't. Still 9.9/10.

Well built using Source components but it has its limitations. The idea of having a frozen reservoir directly on your back is great, it's like mobile AC, right? I bought this gear for use during a 10 day long course of fire in the desert. It turned out to be about 115 by 1500 on most days.

In practice, you're obviously going to need to have access to a freezer and keep your reservoir frozen / super cold until just before you want to use it. In most climates, that means you need it around 12 - 1700, for the hottest part of the day. If you strap this on in the morning, it's going to keep you cool when you don't really need it to do so, then by the time you need it, it's warm.

I was able to keep the thing on ice until noon, then installed it to my carrier and used it for the afternoon. This was a controlled situation on a range where I had access to my vehicle and cooler. It worked for me, sorta.

At 115 degrees outside, it obviously won't last the whole afternoon and once it's thawed, it's hard to drink out of. The reservoir is a sorta flexible plastic that does not really work well to drink from. Unlike a flexible reservoir, this hard reservoir doesn't collapse. I also had an issue with the Source tube getting kinked but worked those out after some adjustments.

As for comfort... it feels a bit weird and more then once I found myself feeling for the bottom of the plate to see if it was falling down, which it did not do. After using it for 4 days, I actually switched back to my camelback over my carrier due to the issue with not being able to drink from it very easily. I also got tired of installing it at lunch, just so I could get a couple hours (maybe) of "cool" on my back. I was better off dunking my shemagh in the cooler ice water and wrapping that thing around my head and neck.

Overall, it's a cool idea but for the money, I don't know if I would suggest this product. You would really need a few reservoirs available in a freezer or cooler. It's not a bad product, but its use is limited and does not align with the price tag.

Hi Carl,
Thank you so much for taking the time to share your experiences with your IcePlate Sleeve Combo. We are sorry to hear it did not live up to your expectations. Your timing is great though, as we are about to release our IcePlate Curve One-Way Valve which will be available for free to all IcePlate Curve owners. We have been developing it for the last nine months and it makes IcePlate Curve truly effortless for users at all levels.

Here are a few points we wanted to highlight that we hope will be helpful for you:
1. The IcePlate Curve concept is to provide a 'human booster rocket' (think Solid Rocket Boosters on the Space Shuttle) as opposed to a mobile A/C. Since heat stress in the body is cumulative, IcePlate Curve can be used before it gets hot (much like hydrating before your activity) to 'pre-cool' the body for the absolute best result. Pre-cooling is a technique used by elite athletes everywhere, but it is particularly prominent in professional cycling where it has been used with great effect for over a decade. The thermoregulatory effect on your body from IcePlate Curve pre-cooling lasts far longer than the 'cool feeling' we get right when we put IcePlate Curve on our body.

2. Once the first IcePlate Curve is depleted half-way through the day, you can rapidly swap out just the IcePlate Curve at lunch for a fresh one because IcePlate Sleeve itself is 'set and forget' - it only needs to be installed once. It is designed for rapid IcePlate Curve swapping, just like a mag change on our duty rifles.

3. Shemaghs dunked in water and placed on our neck can 'feel' nice for a brief period of time which is always great, but because they use water in a liquid state and can retain just a fraction of the water contained in IcePlate Curve, they can't pack the cooling power or duration of conductive tools like IcePlate Curve. This is particularly true in dry, arid climates. The energy isn't there because only one phase change state is available (liquid to gas) as opposed to two phase changes with a frozen IcePlate Curve (solid to liquid, then liquid to gas).

Hopefully this information is helpful, but we look forward to getting you one of our One-Way Valves for your IcePlate Curve to facilitate year-round enjoyment. We hope you'll give it a try because it works so well (physics, lol)!

Please let us know if there is anything else we can do for you. #StayFrosty

Used it for the first time yesterday and it worked phenomenally. I got a solid five hours hours under my carrier. Will be purchasing another soon and have already recommended this product to others.

Hands down the best water source i've ever had on the back of my plate carrier. No more ripping camelbak bladders going in and out of hmmwv's!

mounted on the back of my tactical vest with no problems. seems to be very secure I can't feel it moving around. it's easy to fill and insert into the sleeve, I routed the hose up thru the Molle webbing and over the shoulder. sits flat and tight to the vest so sitting in a vehicle you almost don't know it's even there. 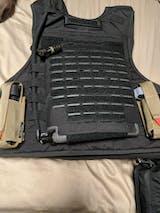 Showed up earlier than shipping said it would. Well made and fits well in the sleeve. Mounting directions not being included with the straps is my only complaint. After some trial and error I was able to mount to my plate carrier.

Hi Shawn, We are so happy to hear you are enjoying your IcePlate Sleeve Combo! We have PDF instructions on the product page as well as instructional setup videos. Sorry for the confusion. #StayFrosty
D
D.R.

Thanks for asking me to review. Would love to but still waiting with no end onsite. Will be happy to change this if it arrives