We are hiring! Click here to start making a positive impact on the world! Limited Quantities of Sleeves now in stock and shipping now!

MultiCam, Coyote Brown In stock, shipping now. Black, Ranger Green are available for the IcePlate MOLLE Combo in pre-order only.

Designed and manufactured in the USA from USA materials.

Bulk Unit/Agency/Corporate Orders: For 100 units or more, please email us with your Unit/Agency/Company in the Subject line from your official email account (personal email addresses will not be processed) and a Qore Performance representative will contact you within 24 hours.

M
M.
Excellent piece of gear for any PC 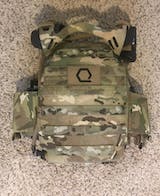 It works amazing and I love it!